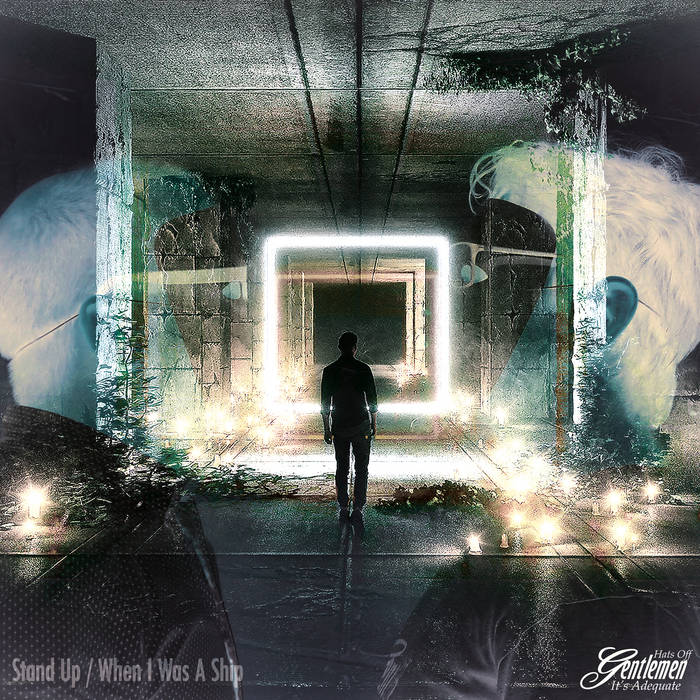 This is a double-A sided single release. Both songs are from Hats Off Gentlemen It's Adequate's forthcoming (at the time of writing) album 'Out Of Mind'.

'Stand Up' was inspired by those who stand up against hatred, and against those who rewrite history for political gain. There's a video for this at www.youtube.com/watch?v=naEbnnxWe3o

'When I Was A Ship' was inspired by Ann Leckie's Imperial Radch series. The main character had once been a warship, whose artificial mind had been distributed within the ship, and also within many ancillaries - prisoners who have had their minds wiped. The ship itself and all of the other ancillaries was destroyed, leaving just one fragment of the mind left in one body.

'Stand Up' is defiant, angry and punchy. 'When I Was A Ship' starts more introspectively, then becomes more aggressive.

Has Off Gentlemen It's Adequate jointly won the 'Beastie's Rock Show Album Of The Year Award 2018' along with Alice Cooper and Roger Waters.

Bandwagon Network Radio CD Of the Month July 2018
"I feel as if I am being taken upon a journey of massive proportion. A work of Progressive Rock that is, in my opinion, second to none."
“Vent” starts the whole journey of this masterpiece off and goes straight into the absolute perfection of the song, “Almost Familiar”, and to be quite honest, this is progressive music at its finest! Every subtle keyboard tone is felt deeply as the music swirls and sways throughout. The vocals here truly fit the lyrical compositions and I can’t say enough about the fluid bass guitar jazz influenced runs, the vocals, and drumming."

"On top of all of this is the beautiful flute work and the stellar guitar that just soars throughout the 17 tracks contained within. A lot can be said of structure within a piece of music, and every track on “Broken but Still Standing” is just structured perfectly."

"The vocals remind me so much of Bowie at his finest. I must say that I am completely blown away. I aluded to a comparison of Pink Floyd near the beginning of this review, but I will say that, without a shadow of doubt, Hats Off Gentlemen It’s Adequate is in a league of their own! My hat is off to all of you in the band for creating this masterpiece!"


Jupiter Variation - "One of the best progressive releases of the year"

Prog Radar - "Broken But Still Standing’ is a brilliantly perceptive and original work of art that enthralls with every listen. Taken as a whole it is an utterly immersive musical experience that will captivate and enlighten the listener, Hats Off Gentlemen Its Adequate has to be one of the most creative and innovative artists out there today."

Track Name: Stand Up
You tell me this never happened
I was there I heard the voices
We're supposed to pretend to forget, but refuse to disappear

Liars accuse, fake news, fake camoflage
Throw enough till it sticks though it stinks
It's all a game for someone like you

Smear and shame, play the blame game, fan the flames
Higher and higher, this is their kind of fire
And it will burn us all down

When the painted us as traitors
I almost let myself down
Surrender tempting, simple end, outsource morality
Losing track of what I'm meant to forget
Post-truth, rationality post-hoc
Poster boys deployed with their cheat sheets
Hot shot faces, scripted gravity

When no-one stands, till someone else stands
We're all complicit
Stand first, stand fast, set the precedent
There's a future still unwritten
No destiny only choice
The world is ours for the making, breaking open the shell
And unlock the voice
Track Name: When I Was A Ship
When I was a ship
Was one and many
Then I was blended
Now lost and empty